One of the huge advantages of being represented by Word|Link is having the opportunity to talk to other writers who are part of the talent stable with books saddled up and ready to go.  The talented and four time Emmy Award winner, Terry Irving, is one such author.  I got the chance to speak to him about his career and his latest novel, Courier, an action packed ride of murder and political intrigue.


So,  Terry, tell me a bit about yourself. 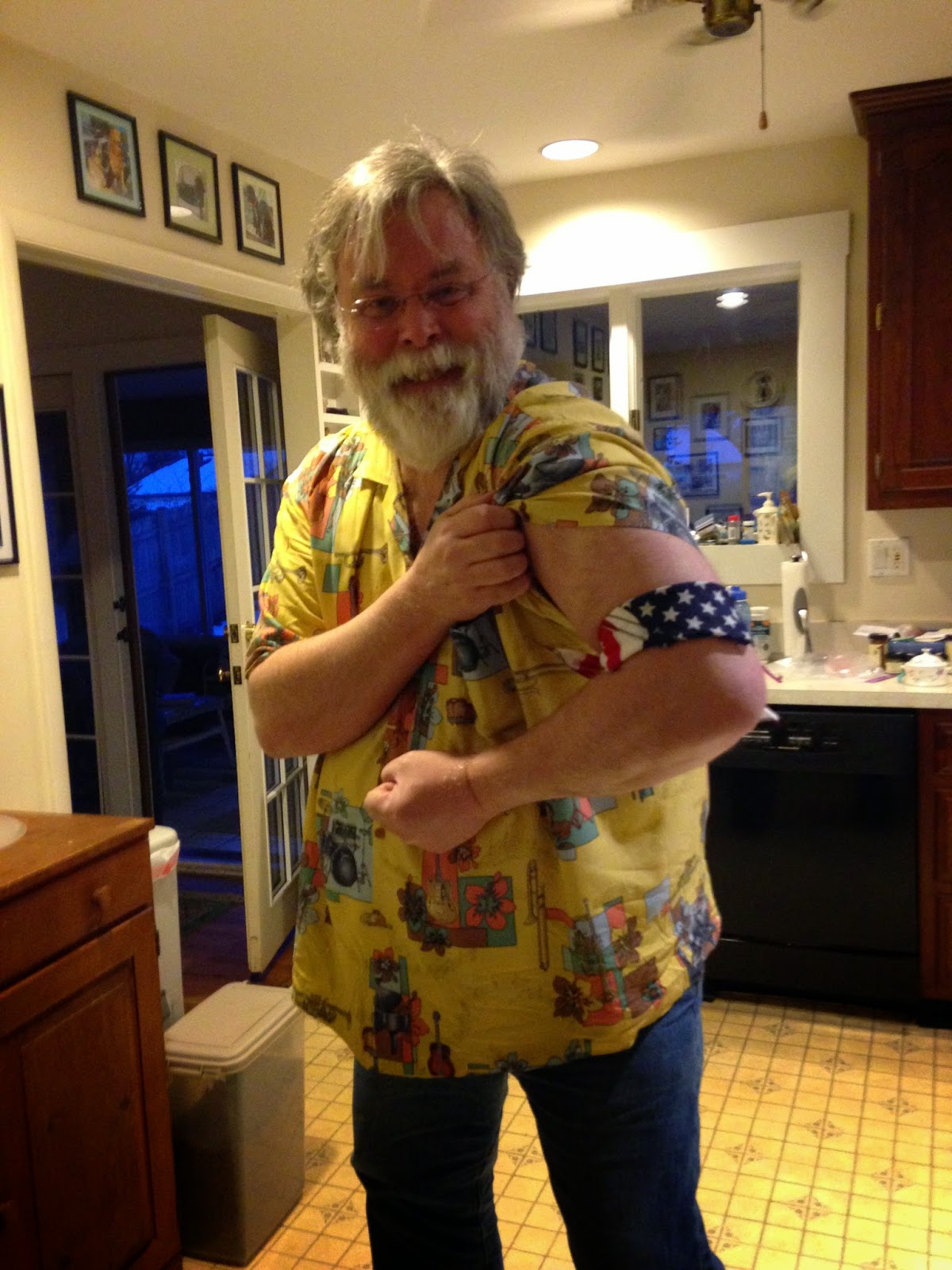 I'm an over-60, over-weight, over-sized former television writer and producer who recently discovered that I hated wearing a suit and tie everyday and wanted to find something I could do that could be done in an Hawaiian shirt and Jeans.
My hope is that Writing Novels will fulfill this dream. So far, it's been fun but not profitable but I believe that all the television outlets in Washington DC have met and decided that I'm too dangerous to hire so I may be stuck with this decision.  However, the truth is that I sit in an office with everything I could possibly need within arm's reach, my dog visits whenever there is a thunderstorm, and my wife is usually around so it's really quite pleasant. My children have made sure that I don't have any retirement savings so I've really no choice but to become a massively best-selling author. Well, I guess I could starve but the massively best-selling option sounds like more fun.
A quick note on How I Got Here. I came to Washington in 1973, intending to recover from college for a few weeks until my girlfriend and I decided on a new and much more exciting place to live.

Somehow, I'm still here. Starting as a motorcycle courier carrying news film for ABC News back during Watergate, I have spent most of my adult life messing about in television news. I spent 20 years as a producer at ABC, got bored, and subsequently have had at least 20 jobs over the next 20 years. I've covered the Civil War in Beirut, South Africa before and after the release of Nelson Mandela, Tienanmen Square, the Fall of the Berlin Wall, and the Roswell UFO landings. Oddly, it was more difficult to believe the Chinese version of Tienanmen Square than it was to believe that there was a coverup of aliens crash-landing in Roswell New Mexico. I've always been thankful that "belief" doesn't play a part in the news business.
Just to keep things interesting, I've also taken two online streaming media companies into bankruptcy, produced shock jock Don Imus, became one of the first all-digital editors, and wrote the Users Manuals for most of the equipment used in modern newsrooms (which hasn't kept obnoxious kids half my age from scolding me for not learning their particular flavor of newsroom wordprocessor every couple of years.)

It sounds like an eventful life.  As part of your plan to be a best-selling author, you recently had Courier was published – what’s it about?

"Courier" was the book that I--like every other journalist--was incubating in the back of my mind for the past 20 years. In 2010, during a period of severe underemployment, I decided to finally get around to writing it. It's a political/motorcycle thriller based on my experiences flying around at completely illegal speeds, touches on the real reason that President Richard Nixon resigned, describes what a night run on a Kawasaki 500 triple through Rock Creek Park feels like with a Datsun 240Z on your tail, and also includes post-Vietnam depression, alcoholism, a tender love story, the earliest computer hackers, and a crack government kill squad.
Clearly, it's not about MY life but it does have the flavor of the paranoid, turbulent 1970s. (The odd thing about all that paranoia is that it turns out that the US government WAS after us and they WERE infiltrating all the protest movements and they WERE killing people who disagreed with them. Trust me, no one except the Weathermen really believed all that back in the day.)
If you want a Hollywood "high concept" description, it's "Three Days of the Condor meets Easy Rider."
Living with this book hasn't been easy. It took six months to find an agent willing to take it on (a New Zealand-based company, of course) and three years for the agent to find a publisher (a British imprint run by a man with the impenetrable name of "Emlyn Rees".) Finally, after waiting for 18 months for the crew of unemployed monks they hired to hand-copy every page, Courier was released in May of 2014.
Flushed with the excitement of this ground-breaking event, the publisher ceased to exist a month later.
Really. They just disappeared. And, here I'd already written the sequel ("Warrior," which begins with the Wounded Knee Occupation of 1973 and includes rides on the Kawasaki Triple and a Vincent Black Lightning.)
They gave me back all the book rights and the non-existent movie rights, tipped their hats, tucked their forked tails under their arms, and vanished in a puff of sulfurous smoke.
Well, I am not one to be discouraged (suicidal, sure, but not discouraged) so I've just kept on writing stuff. TV Writers may not be very good but we are VERY fast.

Along with the two books in the Freelancer series, I've completed "Day of the Dragonking," the first book in the Last American Wizard paranormal thriller series,
begun the first book about Angel Pearl, a private eye in 1930's Manila, ghost-wrote "Overreached: Blood of Patriots" (a conservative fantasy about gun nuts rising up against a liberal president,) self-published books on unemployment, World War 1, and the first part of an autobiography. I might well have written something else and simply forgotten all about it but I think that about covers it.
Sadly, none of these worthy tomes is making a dime in sales.
Oh! I knew there was something. I also wrote a documentary about Jewish refugees in Manila which was just shown at Malacanang Palace. I was fired immediately after completing that one. No idea why.

You say it's not about your life, but you were a courier yourself at one stage.  Where did the idea come from?

The cool answer is that "Courier" came from my own experiences in 1973. The rather nerdy answer is that I got the initial idea of Richard Nixon really being a traitor from an article that Renata Adler wrote in 1976 (and I had to wait for the internet to be invented to find again) and then backed it up with Fred Emery's brilliant book, several BBC documentaries, and all six of the Nixon books that just came out in July where Nixon's treason in 1968 was laid out and clearly proven. Oddly, you won't find a mention of Nixon in "Courier." All of this stuff is in the backstory. Really, it's about racing motorcycles through DC, escaping through subway tunnels, hacking the earliest computers, and other far more interesting stuff.

It sounds like it would make a great action movie.  Who would you choose to play your characters?

I initially used myself as the hero in"Courier." That lasted for a day and then I realized how boring my real life was.
Subsequently, the entire book was based on a picture of Nicolas Cage on a motorcycle I clipped from something. Obviously, I'd like Nic to be about 30 years younger, Ellen Page (the star of "Juno" and that roller derby movie) as his girlfriend, Eve Buffalo Calf, Humphrey Bogart as the Gray Man, and Steve Jobs as the leader of the computer geniuses who are the hero's roommates. (Oh yeah, I forgot that I also completed the screenplay for Courier last fall)

So how long did it take you to write the book?

Well, as I said, I learned to write in television with it's ridiculously short deadlines. I completed the first draft in 8 weeks but I was slowed down by a freelance job for Bloomberg TV (where I was writing Finance--for me the functional equivalent of writing in Swahili.) Of course, I rewrote it 5 or 6 times before I could stand to read it.  When I began the first 5 rewrites, I could be heard screaming "Who wrote this drivel!"
When I stopped saying that, I sent it to the agent.


Eight weeks isn't long to write a novel.  Did you know where it was going?  Are you a "Planner" or a "Pantser" when it comes to planning a novel ahead of writing it?

Totally a "pantser" (which is a terrible name, by the way.) I usually have an opening scene, a hero, a fairly good idea of the backstory which won't appear in the book, and a few cool things to write about. After that, it's "Mary, bar the door and the Devil take the hindmost." I generally have no idea what anyone is going to say, no clue where they're going, and no clear villains. What's worse is that I have SIX books on classic plot outlines on my desk.
Eventually, things seem to sort themselves out, I discover links between people and things I never intended (EVERYONE in Courier is involved with the US Army Seventh Cavalry, as it turns out) and eventually batter the manuscript into one of the classic forms. Usually, the Killing of the Minotaur.

What advice to you have for writers who are just starting out?

I think that the best way to learn to write is to write. Write a lot, it really doesn't matter what, and then read it aloud. (That works better when no one is listening). You'll hear the "clunks" as the wrong word or a clumsy description goes by. I will readily admit that I'm not a classy writer--frankly, I wish I was. If I could take up more room with descriptions of moonlit nights on the moors or the delicate emotions that run through the hero's mind, I wouldn't have to have so many THINGS happen in my books. It also helps if you like to read. I try not to read anyone whose fiction runs close to what I'm doing so that plagiarism won't lurk in my unconscious but I spend a good deal of time weeping because James Lee Burke or Lee Child or Darian Smith just write so damn much better than I do. I also really enjoy researching so a good deal of my ideas come from arcane articles--newspaperarchive.com is a wonderful place to read news from 1972 or 1872 and see where the holes are that you can run a plot through.
The one thing for a new writer NOT to do is worry. The odds are that everyone is going to hate your books anyway and it's almost a dead cert in the beginning. Don't try to write the Great ANZAC novel or the Great Antipodean Poem right off the bat. Just write something and then try to make it pretty good and send it off to make it's way in the world. You will get better.

Where can we find out more?


Www.terryirving.com and www.tiredoftalkingaboutmyself.com
Courier is available here.
For some of Terry's other work, check out his Amazon author page. 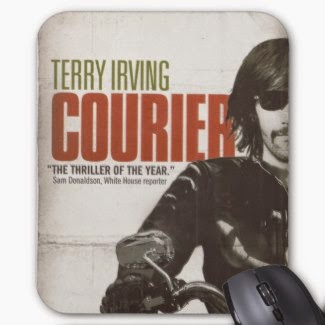