Keith St Clair Butler is the author of The Secret Vindaloo, a fascinating and funny book that explores the experience of Anglo-Indian culture and immigration.  Keith and I are represented by the same literary agency, Word|Link, and I was fortunate enough to be able to interview him about his book and his experiences as an author.

Keith, what is "Anglo-Indian"?  You're Indian but you have a very English sounding name.  Is that part of it?

I’m Anglo-Indian. There is an Indian Constitution definition of us but suffice to say we are a community that came about as a result of the European colonial  encounter with 16 century India. In my case I have a British father and an Anglo-Indian mother. These days, there appears to be more Anglo-Indians living outside India than in the sub- continent. It’s been a very silent, somewhat unexamined exodus.

So was it your heritage or something else that inspired you to write The Secret Vindaloo?

It really began one day, many years ago, when I was in the Baillieu Library of Melbourne University. I pulled a book out of the shelves written by an Indian scholar, Niraud Chaudhuri, who was at Oxford. I opened the book to read the most racially denigrating passages possibly ever written about Anglo- Indians. He profiles the women as genetically whorish and the men as spineless drunkards. I remember blushing and then hiding the book so no one could find it. Profiles like that abound in literature and film. Then again, at the other extreme, especially in recent times, is the fetishing of ethnicity in literature, where Anglo-Indians, because of their hybridity, are seen as the solution to the Clash of Civilisations. Salman Rushdie, in Midnight’s Children, invests in this thinking. Many Anglo-Indians buy into this flattering profile too. I thought it’d be interesting to intervene in these representations and see what comes out.

Those are some pretty harsh portrayals.  Do you think there's a perception that Anglo-Indians have an identity crisis as a result of their mixed heritage?

That quaint notion still abounds in India. I have sat in audiences in Calcutta where Indian politicians, and even some scholars, inject that notion  into their speeches. It always comes as a surprise to me that I’m supposed to have an identity crisis. I think the problem is with  those who hold those views; it’s in their heads, certainly not mine. Anglos in India, given the nature of Indian politics and the exclusive caste system, do pretty well in all fields of endeavor. They punch above their weight. They couldn’t do that if they were having a crisis.

That's a good point.  Although, despite your defense of your community, there are some biting caricatures in the novel - for instance, Gerty Dribbledroz, who you describe as the "professional Anglo-Indian" who comes to address the Anglo-Indian Reunion.


I am Anglo-Indian through and through and have dedicated the novel to Anglo-Indians. It’s not to love the community less to put up a mirror for them to look into, to see how people have made a living out of us in literature and film. Governments have used us as models of ideal citizens to promote their own multicultural programs. We have been a pawn for many. Now, even some Anglo-Indians, rushing to defend the stereotyped image of us, have fallen into the trap of producing equally airbrushed and burnished narratives about us. Like all civilisations, we do have our Golden Age, our heroes, justifiable pride, but it’s also a sign of a maturing of a community if we, on the other hand, do not over do it, over represent ourselves. So when I hear the litany of successful Anglo-Indians, Cliff Richards, the Keeler brothers, Beatles drummer Peter Best, yadda yadda, I tend to nod off. Novelistically, it has been a challenge to both critique and support ethnicity, I really like how James Joyce wrote affectionate parody of his people, I hope readers can see the literary challenges that faced me and understand literary techniques employed to foreground a unique people in a way that has some literary grit.
I can imagine it was a challenging balance to find.  Is there an autobiographical element to the book?
It is fiction but every novel needs some personal traction and yes, mine is born of the imaginings of my life and times.
And was the food element part of that?  Why did you choose food as the immediate focus of your novel?
I guess when you immigrate, you look out for the food you used to eat. All I saw in Australia was homogenized, pasteurized food in shopping malls. It seemed that the food of my community had disappeared. I certainly have never found a decent vindaloo in any food court, anywhere. It seemed to me I could use “lost” food as a deep metaphor for the retrieval of a history.
It's true that very few things speak to culture the way food does!  Is there a target audience for The Secret Vindaloo?
If there is any target for the book it is monolithic thinking, expressed in any form, whether individually or institutionally. But to answer the intent of your question, an immediate audience must be the Australia-India nexus because it’s set in Australia but we live in a global world of mass migrations, issues of displacement, marginalization, shifting identities, immigration laws. I don’t think it’s too long a bow to draw in saying that Puttla Marks engages closely with those issues in The Secret Vindaloo. So, the novel could have wide appeal.
Who were the major literary influences for you?
Salman Rusdhie, Irwin Allan Sealy, James Joyce, and generally, satirists.

Any advice for budding novelists?

Engage with your passion: love or hate.  Take it from there!

Thanks Keith.  So where can we buy the book?

The book is available through Amazon at  http://www.amazon.com/The-Secret-Vindaloo-A-Novel/dp/0473279029 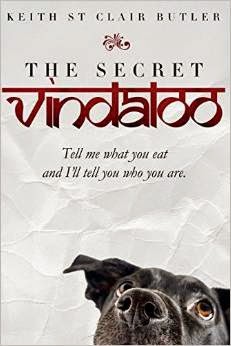