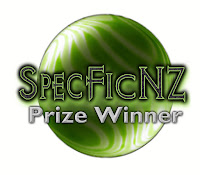 You may have asked yourself (if you've been following my career and are exceptionally astute), "What happened to that prize winning novel manuscript, Agents of Kalanon?"
For those who aren't aware of it, Agents of Kalanon won first prize in an unpublished novel manuscript competition run by SpecFicNZ a few years back.  It's a murder mystery in a fantasy world recovering from war and where things are not always as they seem.
I'm thrilled to say that the book, now titled "Kalanon's Rising" will be released very soon thanks to a financial grant from SpecFicNZ and will be the first in a series of adventures for these characters.

Want to stay ahead of the Agents of Kalanon news?  Sign up to my newsletter.  The next issue will include a sneak peek at the cover and also a free preview sample.  Don't miss out!
Posted by Darian at 17:18