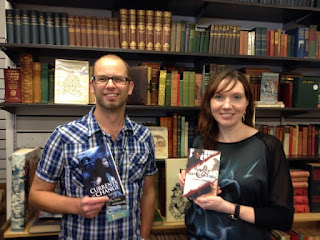 I met with Debbie Cowens at a convention in Rotorua where we were both launching novels.
Recently I got another chance to talk to her about the clever and hilarious mashup that is Murder & Matchmaking.  What happens when two beloved classics join together?  Could anyone withstand the combined force that is Lizzie Bennet and Sherlock Holmes?
Check out the interview:

So Debbie, what can you tell me about Murder and Matchmaking?
Murder & Matchmaking is a humorous mashup of Pride & Prejudice with Sherlock Holmes characters. It was a fun to throw together elements from some of my favourite novels. Murder & Matchmaking takes the idea that Mrs Bennet has started murdering the beautiful young ladies of Hertfordshire in an effort to secure husbands for her daughters by disposing of any competition. Elizabeth Bennet has been investigating these crimes and when Mr Sherlock Darcy arrives in the area to investigate the mysterious deaths with his friend, the amiable physician Bingley, they soon clash due to his derision of her efforts.

There are plenty of references to the original texts – Mrs Bennet’s victims include some characters from other Jane Austen’s novels, but there’s also some new twists and reinventions. Lydia Bennet, for example, is a mischievous pug loved only by Mrs Bennet. The aim is that it should be fun for fans of Jane Austen and Sir Arthur Conan Doyle, as well as those who haven’t read them.

Why do you think the mash up genre is so popular?

I think the appeal lies in the ability to both create new stories and celebrate treasured literary classics. Characters like Elizabeth Bennet and Sherlock Holmes are deeply rooted in the collective cultural imagination – they’re often familiar even to people who haven’t read the original works due to a multitude of TV and film adaptations with various incarnations. 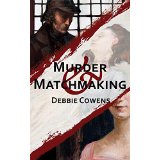 What inspired you to combine two such iconic stories?

The idea first came to me after writing a darker Jane Austen inspired short story, Death & Dismemberment, about an unhappily married young lady who wishes her rich old husband dead and hires a pair of mysterious strangers, Miss Grim and Mrs Merryweather to help her do the deed. I found that I enjoyed the blend of an Austenesque ironic authorial voice with the macabre subject matter of someone ruthlessly plotting murder for petty and selfish materialistic consideration. The notion of reimagining Mrs Bennet as a serial killer who would heartlessly kill any potential rival to her daughter was irresistible as soon as it appeared. It then seemed obvious that her curious, headstrong daughter Elizabeth Bennet would wish to investigate the crimes. The book evolved quite a bit in its various drafts – initially the Bennets were the Baskervilles and it had more elements of The Hound of Baskervilles, but when it became clear that the focus had to been on the rivalry and romance between the two detectives, Elizabeth and Mr Sherlock Darcy, it starting falling into place and the novel became more of a who-will-solve-it mystery/romantic comedy. 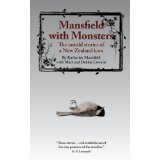 What do you say to people who only read the classics because they had to at school?

Give them another go. Sometimes people are introduced to the wrong text at the wrong time for them at school and being forced to read a book when you’re not enjoying it can create a bad first impression of the writer or even, more regrettably, classics in general. However, if the works of Jane Austen teach us anything it is that first impressions shouldn’t be relied upon and those who appear obnoxious or tiresome may actually turn out to be a perfect match.

What’s your advice for writers?

Also you should try to remember advice that you hear or read from wiser writers so that you will have something more useful to say when asked this question?

Who is your favourite Jane Austen character?

Elizabeth Bennet is definitely my favourite heroine. She’s clever, witty, vivacious, a loyal, devoted friend and sister, and completely unafraid to stand up for herself to anyone. However, I adore Austen’s foolish characters. They can make you cringe with embarrassment and laugh out loud at their silliness, and yet they possess enough recognisably real human qualities and they have genuine narrative power – they’re not simply ineffectual comic relief. With Austen the foolish and ridiculous can drive the story forward every bit as much as the heroines, heroes, and devious antagonists. They have just as much ability to do harm or good, usually by saying the wrong thing or by failing to perceive how the wants or needs of anyone could be possibly be different to their own wishes. Some of my favourites are Anne Steele in Sense & Sensibility, Mary Musgrove in Persuasion, Mr Woodhouse in Emma, Mr Collins, and of course, Mrs Bennet in Pride & Prejudice. 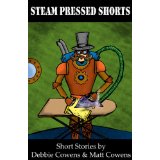 You’ve written both on your own and in collaboration with your husband.  Which do you prefer and why?

I enjoy both but they both have their advantages and disadvantages. Ultimately, whether working on a collaborative or solo writing project, I always write alone. I find it hard to write with other people or noises around. I do enjoy the feeling of being able to bounce ideas around with another person and discuss drafts with them. There is a really nice sense of momentum in collaboration when you each get spurred on by what the other’s written. Writing on your own means that you don’t have anyone else’s inspiration or energy to feed off – it all has to come from you. However, on the plus side you have total control and freedom to do whatever you want with the project. Ideally, I’d like to do more collaborative projects as well as individual ones in the future.

Were you worried about how people would react to you messing with characters as iconic as Mr Darcy and Mrs Bennett?

Yes, people have such a strong sense of what these characters are like in their heads that there is always a risk that they’re not going to like what you’ve done with them. I think I felt safer messing with Mrs Bennet than Darcy or Elizabeth Bennet because readers don’t tend to relate to her with any sense of romantic admiration or empathic attachment. We’re amused by her ridiculous melodramatic complaints or annoyed by her interference.

Combining Mr Darcy and Sherlock Holmes was somewhat daunting because they are both very iconic and whilst they have some similarities as characters, they are quite different deep down. What matched better between the original characters was the relationship they have with respective best friends, Mr Bingley and Dr Watson, both of whom are very amiable socially and deferential to their friends’ judgement and opinions. I think we have all become used to seeing very versions of Sherlock Holmes in TV and film adaptations so people are generally accepting of pretty broad interpretations of Sherlock.

I was very much intimidated at the prospect of writing Elizabeth Bennet as a character. My first draft didn’t even feature Elizabeth at all - the heroine detective who proved an equal match for Sherlock was Anne Baskerville, a colder, more serious character. It was based on some very wise feedback from my editor that the heroine should probably be a bit more like Elizabeth to make my mash-up more closely align with Pride & Prejudice. I think it worked better with a more lively, witty female detective who acts as a foil to Mr Sherlock Darcy’s seriousness and self-importance.

Murder and Matchmaking is available on Amazon.com and good bookstores.  To learn more about Debbie Cowens and her work, follow her at  http://debbiecowens.blogspot.co.nz/ or on Twitter @debbiecowens
Posted by Darian at 02:00