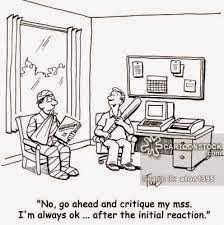 This week I received a rejection notice for one of my short stories.
Not unusual.  Any writer gets dozens more rejections than acceptances.  They can often be quite uplifting and complimentary, frequently they're bland, and occasionally they give helpful suggestions for improvement.
But sometimes they contain something that hurts.
This was one of those times.
It came from a magazine which had shortlisted the story and clearly liked it over all.  They'd asked to hold it for three months to see if they could find a space for it, but in the end couldn't so they were releasing it back to me with assurances that it was high quality and they were reluctant to let it go.  To be helpful they included comments from their submissions readers.  One of them clearly did NOT like the story.

"The entire thing is so poorly written that all the interest gained by the premise and the characters is lost," it screamed.  "It needs a re-write, with someone holding a cattle-prod to the author's self-indulgence gland."
Ouch.
I know not everyone is going to like my style of writing or love any particular story and it's okay if someone doesn't get it.  I also know that, as constructive critique goes, those comments sit better in the "internet troll" file than the "professional feedback" one.  I've won prizes with my writing on numerous occasions and gotten good feedback from other editors on this specific story as well.  But despite the positive comments from the other submissions readers, it's the negative one that stuck in my head.

Why do the negative comments stick more?
Well, psychologists believe there's a good biological reason for why humans give more weight to negative feedback than to positive.  Back when humans were developing, every day was an issue of survival so negative feedback could mean the difference between life and death!  These days the worst I'll get is a bruised ego, but the brain is hard wired to give it more attention anyway.  It's estimated it takes at least 10 positive interactions to balance out a single negative one.  Just to balance!!
Nothing stifles the creative juices more than obsessing over negative feedback as if your life depended on it.  So how can we deal with that?

Who is it from?
One way is to figure out whether we think that person is worth listening to.  Celebrities use this method all the time when they refuse to read gossip magazines.  They don't value those opinions so they don't pay attention to them.
I don't know who gave me those comments.  Someone who thinks they're witty?  Someone oblivious to how their phrasing could come across as cruel?  Maybe they only like one type of story and it was a submissions market mismatch.  Or perhaps they're an expert in the field.  I don't actually know how this particular magazine selects submissions readers.  Maybe I don't need to know.  I might be able to grade them based simply on the fact that I think they ought to have worded their suggestions more professionally.  My perception of the comment's source can help me choose how much weight I give it - and therefore how much it effects me.

Weigh up the other evidence
Instead of focusing just on the negative, it's important to consciously give mental space to the evidence on both sides and compare.  The truth is almost always somewhere in the middle.
What other feedback have I gotten that supports or counteracts the negative feedback?  As I mentioned, I've won prizes for my writing before and have a justifiable confidence in my skills.  Other feedback on this story has been positive - with the occasional suggestion for tweaks and improvements but over all pretty good.  One of the other readers' comments from the same rejection notice said, "There's some genuine humour in this that had me laughing out loud. Great opening, and poignant twist to the tale. I wondered if the story would carry for the full length, but very pleased that it did."
So I might not have the 10 glowing interactions that my primitive brain wants in order to balance out the negative one, but by objectively doing the math, I can encourage myself to be satisfied that, in reality, most of the feedback is good and this one may be an anomaly.

Objectively assess the value of the feedback
This is important.  Feedback helps a writer grow their skill.
Despite the objectionable phrasing, does this person have a point?  Is there a gem of truth in this for me to learn from?  Are there places in the story I can tighten up?  Is it self indulgent?  If I can set aside my indignation for a moment, there may be something of value in there.  Or there may not.  But it serves me well to ask the question honestly.  I always want to be open to improvement.

Ask, "Is this even about me?"
As a counsellor, one of the best things I help my clients learn to do is identify when someone's reaction to them is actually not about them.  We all approach things with our own experiences and beliefs colouring what we see.  Our reactions to stimuli often say more about ourselves than about the stimuli.
My story was an unusual one and the characters are a gay couple from a subculture that is often stigmatized and misunderstood.  Perhaps that triggered something for this reader.  Perhaps this led to the perception of writerly self indulgence where others might see portrayal of character and culture.
Whatever I decide to think about this is conjecture but if I can't find support for the comments when I objectively assess their value, then coming up with an alternative way of understanding them may help me let them go and move on to the next project.

Trust your instincts
In the end, it's my story.  Writers, as a whole, have pretty good instincts and they know what it is they're trying to get across.  If you've weighed up the evidence and objectively assessed the feedback with an open mind but still don't agree with it then let it go.  You can't please everyone all the time and actually, that's okay.

Or you could always use it to inspire a blog post!  That works too.