Things I Learned from My Kittens 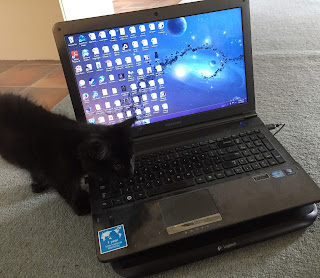 Our household has expanded in the last couple of days. We now have two adorable black kittens in our family, named Apollo and Athena.  And much like the ancient gods they're named after, they have quickly adapted ways to boss their humans around.

Here are a few life lessons I've learned from my kittens: 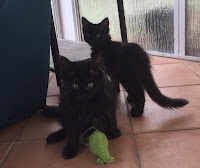 If something's worth doing, do it with passion
Kittens don't do anything by halves.  They don't just jump, they pounce.  They don't just run, they rocket around the room like their tails are on fire.  Eat, sleep, play, fight, cuddle - everything they do they put their whole selves into it.  Whatever we do, if we give it all we've got, there's a much better chance of success. It might just be a toy mouse, but it should be attacked with ferocity until it's dead.

Listen to your body
Kittens do what their bodies tell them.  Eat when hungry, sleep when tired, drink when thirsty.  It's a smart way to be.

Be ready for opportunity
When a door opens, kittens don't hesitate to run through it.  They see a chance for something they want and they'll take it.  Fast.  It means a lot of chasing from me in order to keep them out of mischief but it's a good reminder to seize the chances life offers us. 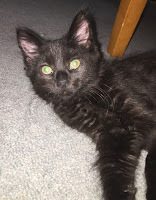 Be you
I've had a surprising number of people comment on the fact that we selected black cats because of the old superstition.  Now I don't believe black cats are bad luck because, well, that's stupid.  But apparently in this day and age there are still people who think it.  Do the kittens care?  Hell no.  They're their own adorable selves because the right people will love them for it.  It's the same for us.  There will always be someone who, for their own daft reasons, won't like you and, in the end, that doesn't matter.  Be you and the right people will love you.


Take care of your own crap
Sometimes we all make a mess.  Even kittens.  Especially kittens.  Messes are part of life.  But if you leave it laying around to cause trouble for others, they'll get annoyed with you pretty quickly.  So deal with it appropriately and ideally cover it up so it doesn't smell. 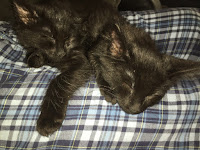 Let people know you like them
Life is too short to waste time hiding your affection and making people guess.  Kittens don't bother with those games.  If they like you, you'll know it.  They'll come see you, talk to you, and cuddle you.  Makes sense to spend time with those you like. 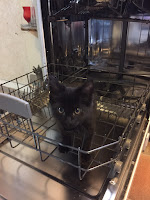 Explore new things
Everything is new to kittens and they want to explore it ALL.  New toys, new spaces, new experiences.  They explore everything and embrace the adventure.

Have fun!
Most important for kittens is to have fun.  What's the point of life if you're not enjoying it?  They don't need big things to be happy - just an empty box or scrap of paper to play with is enough.  It's a good reminder for all of us to enjoy all the little things in life.