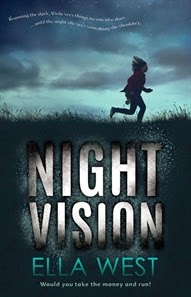 Viola was born with a genetic condition that makes sunlight deadly. In the dark of night, when most teenagers are tucked up in bed, Viola has the run of her parents' farm and the surrounding forest. She is used to seeing hidden things through her night-vision goggles, but one night she sees something that could get her into a whole lot of trouble...

Ella West, author of the Thieves Trilogy, and I share a literary agency.  I was fortunate enough to ask her a few questions about her work and her latest YA novel, "Night Vision" which is out now.

So Ella, tell me a bit about yourself.
Well, we live on what they call in New Zealand a lifestyle block which is a house surrounded by a large garden and a couple of paddocks which happens to be on the edge of a town which is on the edge of a city. We lease a farm a few minutes’ drive away where we run sheep and cattle. It keeps us busy plus lets us have sheep dogs which are fun.

“Night Vision” is set in quite a rural location as well.  What's the book about?
I always like asking people who have read the book this question because it is about so many things and it’s always interesting to see what people have come away with. At its most basic level it’s a crime thriller but really it’s about a 14-year-old girl becoming brave enough to step into the light. There’s also lots of viola playing and sheep stuff and sheep dogs and possums.

Where did the idea come from? Why did you decide to make your main character unable to be in daylight?
And yes, that too. The main character Viola has a genetic condition called Xeroderma pigmentosum (XP) which means her skin can’t handle daylight. There are about a thousand kids in the world who have it and, by sheer chance, I saw a documentary on TV about it and it intrigued me – kids who can’t go out in the day must live different lives to every other kid.

Sounds intriguing. How long did it take you to write?
I think I wrote it in about six months and then had to rewrite it and rewrite it a bit more until everyone was happy with it so it ended up being years. One day I’ll get it right first time (hysterical laughter).

Ah, yes, I think a lot of writers have that relationship with their work!  What got you started with writing?
I was good at it.

Fair enough!  What sort of stories do you like to write?
Anything that interests me but you won’t find me writing sob stories, love stories or stories that are meant to show the reader how to live their lives. Who am I to tell a teenager how they should live?

Are you more of a planner or a pantser when it comes to writing? As in, do you have an outline before you start or make it up as you go along?
I try to plan, I really do, but a lot of the time I make it up as I go along which doesn’t work so well.

What do you enjoy most about writing?
Telling stories.

What do you find most frustrating / difficult?
Telling stories.

Haha. Sounds like that love/hate thing is going strong.  Who is your biggest support when it comes to writing?
The cat likes sitting on the sofa in my office when I write.

Do you have a critique partner or writing group? Other than the cat, of course!
No I don’t, which is probably unusual. I do have a few friends who help but they usually just end up checking my grammar. I have been put in the wrong direction a few times by readers in the past so now I just listen to my agent and my publisher – if they don’t like it then it doesn’t matter what anyone else thinks.
Do you write more than you read, or read more than you write?
Sorry – but this is a really dumb question because if you are writing then you are always reading your own work over and over again to make sure it’s the way you want it. I do read a lot of other peoples’ work as well, mostly YA because that’s what I write and enjoy. Am still reeling over We Were Liars by E Lockhart which I read last month. Wow. Wow. Just wow.

What advice do you have for new authors just starting out?
Don’t do it, but if you do, don’t give up.

For more information go to ellawest.wordpress.com
Or check out Night Vision.