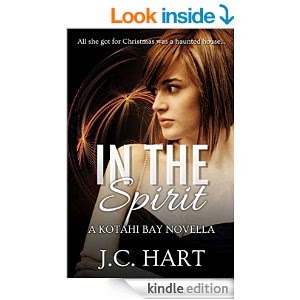 Fellow New Zealander, J.C. Hart recently released her novella, In The Spirit, about a woman dealing with some unexpected legacies as she starts a new life.  Here, she talks about her journey and experience as a new indie author:

I’ve been writing pretty seriously for about eight years now, and while I’ve had several short stories published in zines and anthologies, it’s taken me this long to get the courage to actually try and get my longer work out there.

While I considered the more traditional paths to publishing, ultimately the landscape out there is a little unsettled right now, and I decided that more than anything, I wanted control of my stories. And on December 1st, 2014, I took the plunge with my first novella, In The Spirit.

It changes everything, and it changes nothing:
Hitting ‘publish’ on In The Spirit was nerve-wracking, but it also signalled that final moment where I could bow out or push ahead with my decision. It was a game changer because afterwards, I was officially an Indie author – I’d done it! I’d taken my career into my own hands!

But, it didn’t really change a thing. I’m still just a writer, working in the same way as before – only now the workload is slightly higher, and the sole responsibility of my success rests on my shoulders. I’m still virtually unknown. My books are not in bookstores, or libraries, and I will never likely be a household name.

None of that matters. Because, at the end of the day, I’ve published a book. Someone can read it if they want to, I’m making a little money from the thing I love most in the world. Writing. How awesome is that?!

Choose your own path:
These days, you can do whatever you like, and that’s a GOOD thing. Yes there are oodles of options – traditional publishing, big houses, small houses, indie, hybrid – and that can be a little overwhelming. But it means you can make the choices that work for you. And that you can change your mind. Be flexible to the market, adapt as you learn. Experiment if you like, until you find the thing that works best for you, but keep trying new things, explore, have fun. The publishing world is constantly evolving, which means there is always room for you to evolve. Never before has a writer had so much control over their career. I say, embrace it. Figure out what success looks like for you and then figure out the best path to getting there.

Sometimes, it’s really hard:
There are always going to be books doing better than yours, and as tempting as it might be to check in on your sales number daily, it’s a terrible idea. I say, give yourself a week of that post release. Go nuts. Check that ranking, eye up your expected royalties, see whether you’ve made any best-seller lists, and pore over reviews.

But try not to interpret everything in a negative way – a 3 star actually means someone thought a book was good. That’s still awesome! Remember that all reviews, good and bad, are one person’s opinion. Some of them you can learn from, and some you can’t.

You’re never going to make your million on one book though, or two. All the overnight successes you’ve heard about have been working their asses off for ten years behind the scenes.
So get back to work. The royalties will still get paid whether you keep an eye on them or not, and endlessly refreshing your Amazon page isn’t going to make the rank climb. Writing your next book though, getting it out there to the world? Well, that’s a valuable investment of your time.

Finally, find your tribe:
This is a tumultuous journey. Don’t go it alone. You’re going to need help along the way, so find the writers you gel with, the ones who know what to say on a rough day, the ones who can crack the whip and get you back to work when you’ve slumped so far you don’t think you can write another word. Surround yourself with people you believe in, and people who believe in you, because that’s what will help you get through. We might write alone, but we certainly don’t have to publish alone.

I’m always keen to connect with writers and readers, so you can find me on twitter @JCHart or over on my website just-cassie.com. Thanks for having me Darian!

J.C. Hart's very enjoyable novella is available in ebook format on Amazon.
Posted by Darian at 19:52